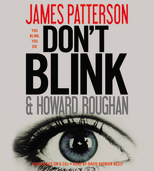 James Patterson and Howard Roughan team up again for the stand alone thriller Don't Blink. Past collaborative efforts include Sail and You've Been Warned.

Nick Daniels is a reporter. He heads to a New York steakhouse to interview a reclusive baseball legend. What he gets instead is a front row seat to what appears to be a gangland killing. Nick can't help himself - he start investigating on his own. And what he finds? Everyone has their own agenda - the cops, the mayor, the mob, even the baseball legend.

Definitely an entertaining story. Over the top? Yes. But really isn't that why we all indulge in a Patterson story? What I initially believed was going to happen took a distinct left turn, holding my interest until the end.

I listened to this one in audio format. The reader was David Patrick Kelly and I really enjoyed his voice. It's slightly wavery, yet gravelly and brought the character of Nick to life. Hachette seems to always include music and sound effects in Patterson's audio books, which adds to the whole listening experience.

Listen to an excerpt of Don't Blink. Read an excerpt.

Patterson's work is starting to wear a little thin with me, but this one sounds pretty good. I have to tell you, some of those sound effects scare me while I'm driving!

It sounds like the sort of book I wouldn't want to win.

So much output for one man! I hadn't heard of this one so thanks for the review.

I have been hoping to have a chance to listen to a Patterson on Audiobook :)